It is difficult to describe what happened next—except to say that it is a moment that occurs uniquely in the histories of refugees. A tiny bolt of understanding passed between them. The woman recognized my father—not the actual man, whom she had never met, but the form of the man: a boy returning home. In Calcutta—in Berlin, Peshawar, Delhi, Dhaka—men like this seem to turn up every day, appearing out of nowhere off the streets and walking unannounced into houses, stepping casually over thresholds into their past.
– Siddhartha Mukherjee, The Gene: An Intimate History

As 2016 draws to a close, I find myself engrossed in one of the year’s best received book -‘The Gene: An Intimate History’ by Siddhartha Mukherjee. I am only halfway through this 900-page behemoth but am already so in love with every page that I can’t stop myself from sharing it. “When you are in love, you want to tell the world,” said Carl Sagan, and that perfectly describes my predicament. Mukherjee’s last book, ‘The Emperor of all Maladies: A Biography of Cancer’, published in 2010 took the world by a storm. Readers were so impressed by the poetic writing style and the thorough, well-researched history, that it won him the Pulitzer Prize for General Non-Fiction that year. This time the author has returned with a ‘meta’ story – a biography of the emperor of all cancers, the gene. 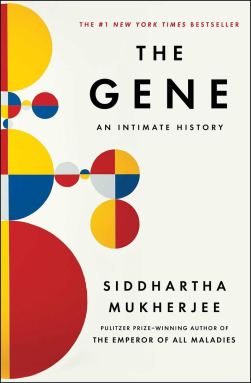 Mukherjee’s family hails from my hometown, Kolkata, India; and the city plays a central role in the story. Like a stallion tied firmly to a post, the narrative moves far and wide covering every inch of the relevant history, yet returning again and again to the city of Kolkata and his families struggles with mental illness – something that haunts his kin like a ghost in the genetic machine. The subtitle ‘An Intimate History’, takes on a new meaning in this context. They say that best pieces of fiction are part autobiographical. In Mukherjee’s case, so is the best non-fiction.

The first thing that strikes me about the book is how thorough its grasp on history is. Scientist by scientist, the author tells the story of the discovery of the science of heredity, evolution, DNA and the future of the human race. The descriptions of historical events make you feel as if you were there (as if he were there!) The accounts of the personalities seem as though you knew those people intimately (as though he knew those people intimately!) He describes the struggles, the pulling of one’s hair and the sheer maniacal agony that are the universal constants of the most important discoveries in science. You walk through the streets of London being shown the landmarks where the most important pieces of the puzzle were assembled. You witness the ugly history of eugenics in Britain, America, and Germany and struggle with the vital questions of Man’s role in shaping his own destiny. You step into the lab as the vigorous shaking of a vat of multiplying bacterial cells, each containing a mixture of genetic material from two completely different organisms, announces the birth of a brave new world of gene manipulation.

Then there is the science. After having built up the context, after having primed you with all the pieces of the puzzle, and having led you through a trail of poignant questions, he hits you with the answers, the ‘kick in the discovery’ as Richard Feynman would have called it. The timely introduction of important scientific concepts and the clarity of explanation make the reader almost giddy with the feeling of having made the discovery.

Kevin Dubnar, a curious psychologist from the University of Toronto Scarborough, set out to find how scientists do their best thinking and how they make discoveries. After a year of studying the habits and behaviors of four prominent microbiology labs, he discovered that the answer lay in their prolific use of analogies when explaining anomalies to their colleagues. Several science communicators grasp this concept intuitively and use analogies to make difficult scientific concepts easier for laymen to understand. Mukherjee, however, takes this technique a step forward. His metaphors while engineered for precise explanations by Mukherjee the scientist are crafted by Mukherjee the poet to be paragons of literary beauty. Here are a few of my highlights from the book that illustrate the point:

After explaining that genotype (the set of genetic instructions) determines the phenotype (the physical form of an organism) and the selection pressures of the environment act on the phenotype hence allowing or preventing parts of the genotype passing into future generations:

Phenotype, in short, drags genotypes behind it, like a cart pulling a horse. It is the perennial conundrum of natural selection that it seeks one thing (fitness) and accidentally finds another (genes that produce fitness). Genes that produce fitness become gradually overrepresented in populations through the selection of phenotypes, thereby allowing organisms to become more and more adapted to their environments. There is no such thing as perfection, only the relentless, thirsty matching of an organism to its environment. That is the engine that drives evolution

When discussing how the pairing of bases in DNA helps in repairing or recombining broken or damaged strands of DNA through their chromosomal siblings:

Once again, the pairing of bases is used to build the gene back. The yin fixes the yang, the image restores the original: with DNA, as with Dorian Gray, the prototype is constantly reinvigorated by its portrait.

When explaining intergenic DNA and introns – the spacers between genes:

these regions might be described as long ellipses scattered with occasional punctuation marks. The human genome can thus be visualized as:

Concluding a chapter on gene-cloning and gene-sequencing and building on Francis Crick’s metaphor of a new generation of biologists needing a ‘new music’:

Every field of biology was transformed by gene-cloning and gene-sequencing technology. If experimental biology was the “new music,” then the gene was its conductor, its orchestra, its assonant refrain, its principal instrument, its score.

There is a long-standing dogma that science writing needs to be impersonal, objective and dry. Mukherjee’s brilliance in weaving science, history, autobiography and poetry into a polished, meticulous and masterful work of popular non-fiction gives the lie to this idea. If you would like to get your feet wet with some of his writing first, I highly recommend checking out his articles for The New Yorker. He writes about science and its history with the reverence you would find in a fanatics account of a pilgrimage. If you care about history, genetics or our shared human experiences, however, you owe it to yourself to pick up this book and read it cover to cover.

And if you are asking yourself why you should dig into a 900 pager just because a blogger on the internet told you so, you need to remember what the novelist Cormac McCarthy said when asked why he doesn’t write short stories: “Anything that doesn’t take years of your life and drive you to suicide hardly seems worth doing.”